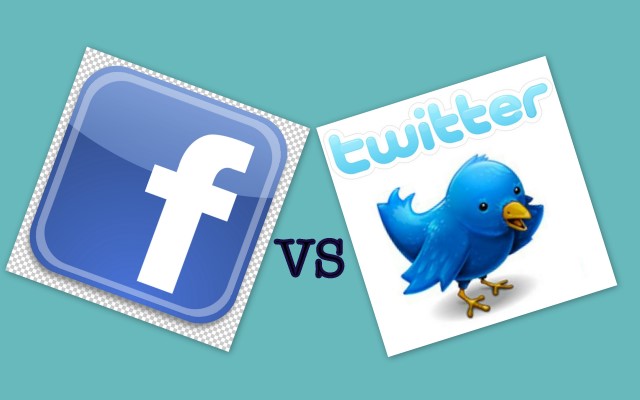 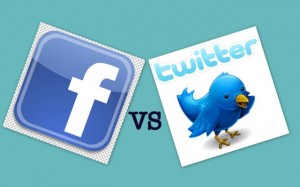 That’s the question I get asked all the time.

The whole social media experience is just plain old networking on steroids. People do business with people they know, like and trust.  Being transparent and authentic online is key.  The more you share and show you care – the more of the friends, fans and followers you’ll get.

Twitter and Facebook are the most popular social networking sites. If you see one, you see the other. Just about every business card, email signature or store signage have them both displayed proudly.

Should they friend/follow the same people in both platforms? Should they try to the push approach and just broadcast on Twitter and engage on Facebook? Or how about the way to “brand” on Facebook – should the Twitter profile be exactly the same?

Twitter is more than instant updates from your friends, experts and celebrities online. It’s really more than “what’s happening.” It has set the standard for “microblogging.”  Facebook tries – but Twitter does.

That’s all it does. It’s just 140 characters of brevity and simplicity – with punch.  Twitter is fast and furious – but is also fun.

Facebook on the other hand is more traditional – a lot slower.  Some status updates stay in folks timelines  for hours; twitter streams move on and out of site typically in minutes (and seconds if you have a lot of Twitter followers).

Facebook is the place where you upload photos, videos, write notes, instant message, create event invites and host of other “add-ons” that allow you to express yourself and promote your business.

Twitter on the other hand, lets you speak to thousands at one time via a quick tweet to enlighten them.

Think of Twitter as a newspaper headline and think of Facebook as the newspaper.  More can be said, shared and displayed on Facebook and the pace is a lot slower so it can be absorbed.  (That’s probably why you find a lot of grandparents hanging out on Facebook and staying clear away from Twitter).

Another major difference is that you can update Twitter every few minutes and not “annoy” your twitter followers; but if you do that on Facebook, your “friends” may unfriend you or block you from their newsfeed.  No one likes too much chatter from the same person over and over in their newsfeed on Facebook, but on Twitter that’s the nature of it.  Twitter chatter is fine. Facebook is show and tell – at a much slower pace.

Well, it’s pretty much a given that everyone and their mother uses Facebook. With more than 750 million people registered users – it’s now as common as a phone number or email address for sure.

Twitter seems to be catching up, last count in January 2011 – there were 200 million people who have Twitter accounts.  But are they using them?

Twitter has been used by TV shows and Teleseminars/Webinars hosts to get feedback from their audience while Facebook is used to get people to go “like” them on their page and leave comments.

A Twitter user will be a little more astute with who they engage with based on interests, which is really easy to find out on Twitter vs. Facebook.  This is really the beauty of Twitter.  Isolated conversations with people all over the world (who may or may not be followers) but you can jump in the conversation and add value.

By using the www.search.twitter.com feature, Twitter becomes the research tool most marketing research scientists dreamed about years ago. With one click, you can find out what people are talking about. If you want to know what the current conversation is on, “social media,” just type that in the search.twitter.com bar. Immediately your Twitter stream will fill up with those who have just mentioned the topic.  You would then elect to respond or just lurk and listen.

Just a like a Focus Group – but in real time.

Facebook does have a search feature – but “isolated” conversation is not how you use Facebook. You could find out more detail information and investigate the various “Fan/Like” pages and become part of that community. Facebook is more about community – people join network, groups and pages.

Twitter is also more promotional than a typical personal profile page on Facebook.  Those who engage on Twitter tend to integrate business more than Facebook. People also create lists of clients or even competitors on Twitter.  Think of this as a big virtual water cooler at work. You communicate, network and get to know people here. The whole point would be to take the conversation off line – and do business.

You don’t find folks searching for old high school friends or trying to keep up with relatives on Twitter. Twitter has carved a niche to be more about business, customer services and branding over Facebook.

Tweeting is a means to an end: to build relationships and brand equity.

📈 Back to Business: The ultimate virtual conference for serious sisters ✊🏾 ✨

🗣️How to Get Published: The Publishing in Color Conference and I’m Speaking!

How to be a PR superstar and Attract Media Attention 🎬